Spartans start with a setback 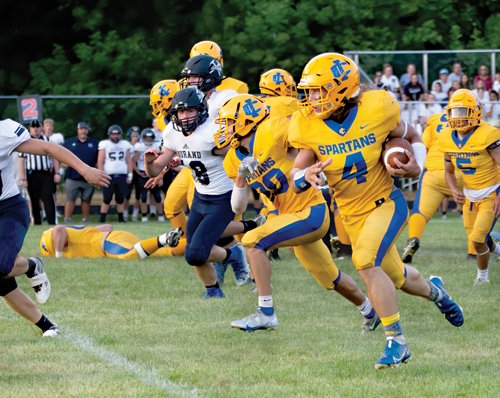 Imlay City’s Lance Wolford looks to pick up a first down during his team’s season-opener versus Durand last Thursday. Durand won the contest.

“We had three drives stall in the red zone during the first half,” Imlay City Coach Brian Tresnak commented. “You aren’t going to win many games that way,” he noted.

“We are going to circle the wagons this week and put in extra work on conditioning and finishing on both sides of the ball. We are better than we played tonight.”

In Thursday’s matchup, Durand took an 8-0 advantage after one quarter was over with.

Imlay City then outscored Durand 6-0 the rest of the way, only to drop a 42-14 verdict.

For the evening, Burgess completed four of ten pass plays as Imlay City’s quarterback. He threw zero interceptions along the way.

His successful tosses were distributed to two different targets. Their ranks consisted of Julian Rojas (two catches for 37 yards) and Cristian Rojas (two receptions for 14 yards).

The Imlay City ground attack wound up with 235 yards on 46 totes.

Xander Nolin added a blocked punt to Imlay City’s cause.

Imlay City will look to bounce back this Thursday when it entertains Blue Water Area Conference rival Richmond. That battle is slated to get underway at 7 p.m.