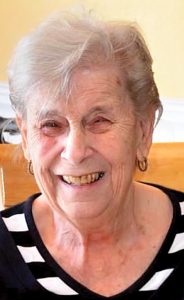 She was the daughter of Alva and Daisy (Yancer) Richards. Shirley grew up in Flint and moved to Almont when she was thirteen. She graduated from Almont High School in 1947.

Shirley loved to read, sew and bake when she wasn’t busy raising her children or enjoying her grandchildren and great-grandchildren.

Visitation will be held on Wednesday, September 8 from 11 a.m. – 1 p.m. at Muir Brothers of Almont, with a memorial service immediately following.

Those planning an expression of sympathy may wish to consider memorial contributions to the Almont Public Library in lieu of flowers.

Funeral arrangements handled by Muir Brothers Funeral Home of Almont. She will be laid to rest at Ferguson’s Cemetery with her husband, Don; and son, Terry.

Please be sure to sign the online register book at muirbrothers.com.