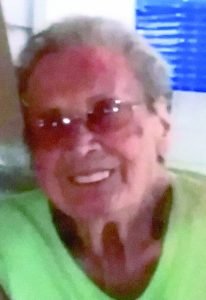 She worked at Ford Motor Company, Herd Lock and other small shops in the community. But for the most part she was a loving wife, mother, and grandmother. Frances was preceded in death by her parents, Vera and William; husband, Eugene; one brother, Bill; and one sister, Irene.

Fran, as she was commonly known, loved taking care of her home and flowers, but especially enjoyed the activities of her grandchildren.

In lieu of flowers, contributions may be made to the Alzheimer’s Association or Hospice of Michigan.

Visitation will be held Wednesday, Sept. 1 from 4-8 p.m. at Muir Brothers Funeral Home in Almont and Thursday, Sept. 2 from 10-11 a.m. with funeral services at 11 a.m. at the funeral home. Burial will follow in Mt. Pleasant Cemetery in Dryden.