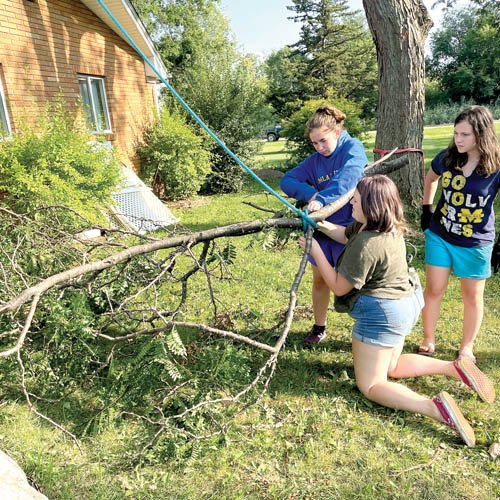 Youth members help clear downed tree limbs and other debris on Boyer’s property in conjunction with their community service project.

IMLAY CITY — Doing for others is the primary mission of the Youth Ministry Group at Heritage Church of Imlay City.

Boyer, who admits to being in her 70s, is a widow whose home and property were in need of a general cleanup and physical repairs.

The property is also home to Boyer’s “Making Miracles Animal Rescue” and her menagerie of animals, including a cat, dog, horse, chickens and other two- and four-legged critters.

Present for the cleanup were Heritage Church’s Assistant Campus Pastor, Kyle Crenshaw, and church leader Randy Hall, who lauded the efforts of the youth and adult volunteers who participated in the community service project.

The adult volunteers were integral as their expertise included professional tree trimmers, roofers and fence installers.

By the end of the day, the volunteers had completed various projects that it would have taken weeks or months to accomplish—and at considerable expense.

“Our youth group and volunteers recognized that she (Boyer) was in need and they wanted to help,” said Crenshaw, who added that helping those in need is priority among Heritage church-goers.

In about three hours time, youth group members and church volunteers had cleaned out Boyer’s gutters, trimmed limbs and trees in danger of falling on her house, and installing 300 feet of fencing along the perimeter of the property.

Boyer, whose husband (Chuck) passed away about six years ago, said she was overjoyed by the kindness and generosity shown by volunteers young and old.

“I had reached the limit of my physical ability to maintain the grounds,” she noted. “Everyone pitched in and they all worked so hard.

“It was a great group of guys and gals and they all worked so well together as a team, Boyer continued. “I’m so thankful and appreciative for everything they did for me, and for my animals.”

The members of Heritage Church’s Youth Group range in age from 12-18 years old.

Crenshaw said the youngsters are always looking for ways and opportunities to lend a hand to people who can use one.

“In this case, we were able to help someone whose life is focused on helping animals.”