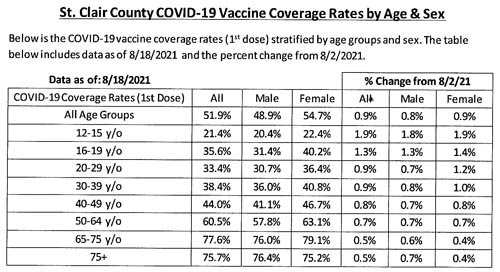 Since early August, vaccine coverage has risen the most in St. Clair County among teens.

As of Friday, nine people were hospitalized locally due to the virus with one in intensive care.

In St. Clair County, 134 new cases and one death were reported between August 14-20. That compares to 122 new cases and no deaths the week prior.

Both counties saw their vaccination rates increase slightly. As of August 20, 44.9 percent of Lapeer County residents were fully vaccinated, up from 44.6 percent one week earlier. St. Clair County’s vaccination rate for those who have completed the doses was 48.5 percent, up from 48.1 percent one week earlier. According to a chart released by the county, vaccination rates rose by the most among teens since early August. Coverage rates for the first dose increased by 1.9 percent among 12-15 year-olds and 1.3 percent for 16-19 year-olds. Among all county residents, the highest vaccine coverage based on age is among 65-75 year-olds at 77.6 percent.

The Lapeer County Health Department will host Back to School vaccination clinics on August 30 and 31 at their offices, 1800 Imlay City Rd. in Lapeer, from 8:30-11:30 a.m. and 1:30-4:30 p.m. where the COVID-19 vaccine and typical childhood immunizations will be offered.

More information, including registration forms, can be found by accessing the Health Department’s page through lapeercountyweb.org.