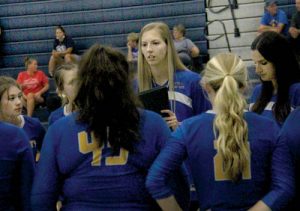 Rachel Van Dyk, talks to her team in a scrimmage last week at home.

She assumes the position from Dan Purvis, who stepped down from the job at the completion of last season.

Van Dyk previously served as an assistant coach for North Branch the past three seasons.