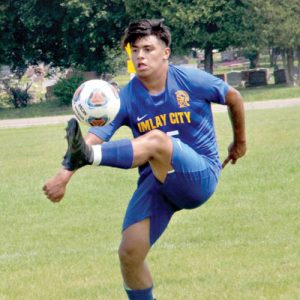 Sergio Galiana, of Imlay City, controls a pass during a match last Saturday.

Imlay City kicked off tournament action with a 4-1 loss to Berkley, the eventual champions.

The team then bounced back, earning a 3-2 win against Bad Axe.

Imlay City followed that up with a 1-1 outcome versus Frankenmuth.