TRI-CITY AREA — The wait is almost over with, the start of another high school football season is just a day away.

Here is a look at our Tri-City squads, who they lost to graduation, their top returnees and their outlook entering Thursday’s season-opening matchups, all of which list 7 p.m. starting times.

In Almont, James Leusby begins his seventh year as the Raiders’ head coach.

His team is coming off a 3-3 overall campaign. That included a 2-2 showing pitted against BWAC teams, good good for fourth place. 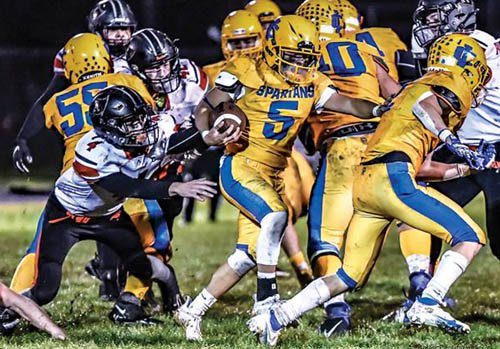 Almont would halve their two-game stint in the Division 5 state playoffs.

Their postseason path began with a convincing 28-0 win against Ovid-Elsie at home.

They then bowed out with a 28-0 road setback to Frankenmuth.

“We hope to get enough wins to make the playoffs,” Almont Coach James Leusby said. “If we succeed, it will be our 12th straight season to accomplish that,” he noted

Almont kicks off their season this Thursday when they travel to Monroe St. Mary’s Catholic. The non-league encounter is scheduled for 7 p.m.

At Imlay City, Brian Tresnak is back for his fourth season as the Spartans’ head coach.

Last fall Imlay City wound up with a 4-3 overall mark. That included a 4-2 BWAC record, good for third place.

Imlay City competed in the Division 4 playoffs, bowing out with a 40-26 opening round loss to host Cros-Lex.

“We have had a solid offseason and expect to compete,” Tresnak said. “The BWAC is always such a tough competitive league,” he noted.

“We are going to lean on our veterans to help guide some new, younger faces. This team is built a little differently than the teams we have had in the past. We’re faster and have changed our schemes to reflect that. When it comes to wins, they don’t ask how, they ask how many.

Imlay City opens the 2021 campaign this Thursday when it hosts Durand. The non-league battle lists a 7 p.m. starting time.

In Capac, Rob Novy begins his third year as the Chiefs’ head coach.

Capac, which was predominately an underclassmen-filled squad in 2020, is coming off a highly successful campaign which saw them go 4-0 versus junior varsity foes and 1-1 against varsity opponents

Novy lists Ubly, Sandusky and Harbor Beach as the teams who should be considered favored to win the Greater Thumb Conference East title.

“Our goal is to make the playoffs,” Novy said. “We will be playing in Division 8 this year,” he noted.

Capac starts their 2021 campaign this Thursday when it entertains non-conference adversary New Haven. That matchup is scheduled for 7 p.m.