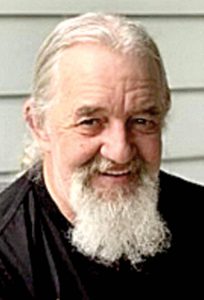 Forrest Michael Hiroskey “Mike” gained his total Healing on August 21, 2021 with his family by his side. He was born June 5, 1951 in Logan, WV to parents Forrest and Lucille (Eplin) Hiroskey. Mike graduated from Logan High School in 1969. He was a proud Vietnam veteran who served 3 tours of duty in the U.S. Navy from 1969-1972. Mike attended Oakland Community College earning his Mental Health Associate degree. He furthered his education by attending Spring Arbor College. He was a member of Lakepoint Community Church. Prior to his retirement Mike was a state investigator for the Michigan Department of Corrections. He was one of the four founding members of the Grey Dragons Association of Michigan.

Mike met his wife Julie at Camp Echo Grove in Lakeville. His unforgettable pick-up line was when he sent her 13 long stem roses, 12 red and one yellow, with a card that read: Church and dinner Sunday night? Yes, no, or drop dead? She said yes. They were married on February 27, 1988 at the Lake Orion United Methodist Church.

He is survived by his wife, Julie; children, Dia (Ray) of Pontiac, Myriya (Roxanne) of Texas, Jordan (Danielle) of Fostoria and Jesse (Andrea) of Peck; sister, Joyce Elkins of Rochester; and brother-in-law, Paul Sutherby of Leonard. Also, his six grandsons, Damian, Jasper, Tristen, Seth, Xander and Liam; and one granddaughter, Deborah Che’.

He was preceded in death by his parents; and eldest son, Che’Michael.

Mike was a true warrior. He was a proud veteran who fought for our Freedom. He loved his family and his friends fiercely. He was a Child of God, loving husband and father, brother, Papaw and a dedicated friend. There was nothing he wouldn’t do for those he loved. He had a great passion for motorcycles and enjoyed the rides he took with his biker friends. Most recently he enjoyed a trip to Sturgis, SD with his good friend Jim. His strength was apparent as he battled cancer for the last five years. He did not lose the fight, but instead gained the Crown of Life that has been waiting for him.

Be sure to share a story on Mike’s Memory Page at www.muirfh.com

Memorial contributions can be made to Show Hope – A Movement to Care for Orphans. www.ShowHope.org