Board seeking community input for their preferences 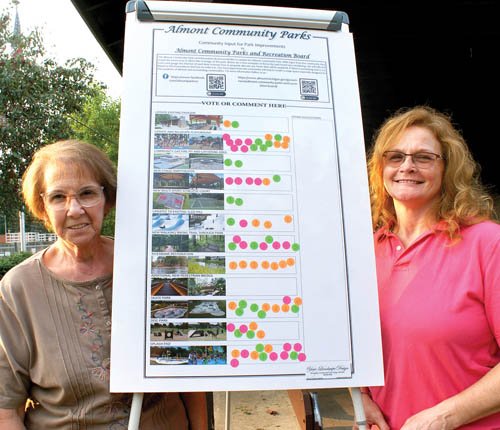 Park Board Secretary Roberta Kudsin and Board Treasurer Jackie Calka invite concert in the park attendees to weigh in on future park upgrades and potential projects.

ALMONT — The Almont Park Board is currently planning for future improvements at the Almont Community Park.

Before committing to making specific improvements, the Park Board wants to know what residents would most like to see in the way of upgrades.

At the August 5 Summer Concert in the Park, board members unveiled a “Community Input” board, asking residents to place stickers numbered 1, 2, and 3 in order of their preferred upgrades.

“We would like Almont residents’ input on some items to be addressed,” said Almont Township Treasurer Roberta Kudsin, who also serves on the park board.

“We’ll have the community input board up at remaining concerts in the park.”

The last concert in the summer series will be held tomorrow, August 26, when 3rd Degree Burns is set to perform.

“Of course any improvements chosen, whether short or long term, will depend on acquiring insurance and the availability of financing, donations and grant funding,” Kudsin said.

She added that a five-year plan for the park has been in place for many years, which comes up for renewal in 2022.

“Hopefully, we can see some improvements before then and add some new ones to the next five-year plan,” said Kudsin. “If anyone has any input/ideas/suggestions, they are always welcome at the park board meetings.”

Almont Park Board meetings take place on the third Thursday of each month at 7 p.m. Meetings are usually held at the Almont Municipal Hall.

However, the Park Board’s July and August meetings are being held at the park pavilion at 6 p.m.