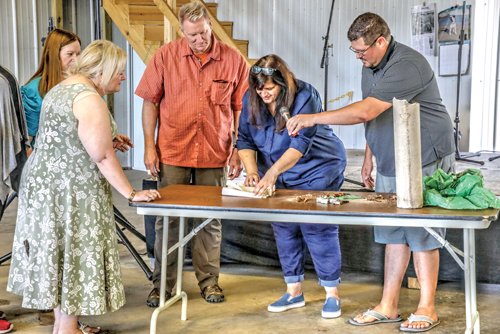 IMLAY CITY —Mementos from the past and predictions for the future comprised the 1970 time capsule unveiled on Saturday during Imlay City’s Sesquicentennial (150th birthday) celebration.
Committee members gathered in the former fire hall to open the capsule immediately following the Chamber of Commerce’s awards ceremony.
Out of the capsule came old razors, letters from city leaders and business owners from 50 years ago and more.
The razors represented the Brothers of the Brush, a campaign on the occasion of Imlay City’s Centennial that encouraged local men to grow beards and facial hair in the lead up to the celebration.
“Congratulations, you’re still alive,” is how a letter from Imlay City businessman and then Imlay City Mayor Les Cole began.
Others, like that from the late attorney Jim Morrice, laid out the Centennial Committee’s prediction for Imlay City in its second century.

They included: a population of 50,000; land values of $5,000 per acre; the construction of community colleges and an airport that serves jet aircraft; the passing of agriculture as an industry; the boundaries of Imlay City and Almont meeting and electric service produced by atomic power.

Unfortunately, some of the letters had been damaged by moisture and could not be read.
After the unveiling, the items were transported to the Imlay City Historical Museum for display.

The buried capsule was recently located by Imlay City’s DPW staff just west of the museum.