The joy of a new bike

ALMONT — Logan Maciejewski facilitated the repair, painting, and donating of 33 bikes for kids to Humble Design as part of his Eagle Scout Project. Logan, a 2021 graduate of Almont High School, said he truly believes that every kid deserves a new bike.
“Humble Design provides toys and stuff for the kids. I want to give bikes to kids who have never had a bike before. There’s just this look that a kid gets when they get a new bike,” he said.
On August 4, Logan and his family delivered the 33 bikes to the agency.
As part of his Eagle Scout Project, Logan spent the work days educating volunteers on bicycle repair, demonstrating how to replace parts, and preparing the bikes for their new owners. Logan said he had help from family, friends and volunteers reached through social media. He said his brother was one of his best helpers. 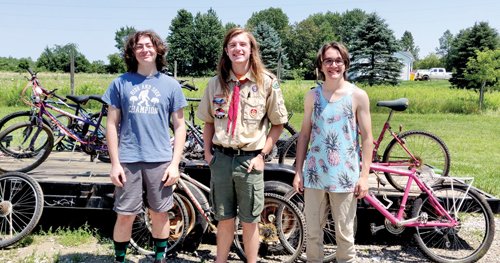 Friends Kameron Palmer, left, and Randy Graham, right, were some of the volunteers who helped Logan repair the donated bikes.

“He was at summer camp last week and it was a lot harder without him. I thought ‘Man, I wish Ridley was here!” said Logan.
The teen’s family helped reach out to look for bikes to fix up, and he was happily surprised by the number of bikes he received.
“I expected about 20 bikes, and I got 62,” Logan said.

Logan chose to donate the bikes to Humble Design. Humble Design says their agency “serves individuals, families, and veterans emerging from homelessness by transforming empty houses into welcoming homes using donated furniture and household goods. Our warehouses are curated by design teams that personalize homes based on our clients’ needs and preferences.” The agency serves families in the Metro-Detroit area.

Looking back, Logan has always been one to share kindness with others.

“I gave my first bike away when I was about 6. There’s just this unexplainable look of joy on a kid’s face when they get a bike for the first time,” he said.

Through this project, Logan was able offer less fortunate kids a chance to own and ride their own bike after coming out of homelessness. His original plan included donating 12 bikes. It’s safe to say, he surpassed his goal, nearly tripling the initial plan.