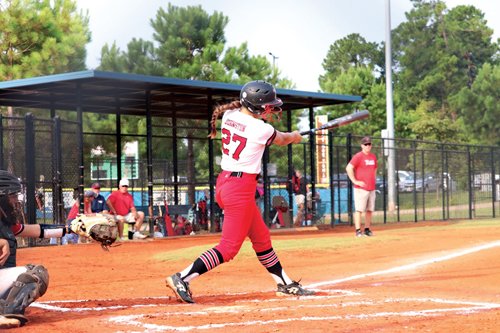 Almont’s Devin Johnston connects on a pitch during action in Myrtle Beach. She helped her team to a fifth-place showing out of 89 teams.

ALMONT — Turnin2 National 15U Pezzoni, which lists Almont’s Devin Johnston on their softball roster, tied for fifth place out of 89 teams at the Triple Crown East Coast Summer 16U Nationals recently.

Myrtle Beach, South Carolina is where the action unfolded.

The team started their successful tournament path on Wednesday, July 28 with an 8-0 win against Steel City Athletics Sullivan.

The following day saw the team drop a narrow 2-1 verdict to Ohio Outlaws Premier 05 Galownia and pick up a 15-0 victory over Great Falls Sharks 16U.

The team then registered a 10-0 triumph against Pennsylvania Krunch; a 5-2 win over Lady Lightning Gold Pedy 2023; and a 9-0 victory against Lower Buck Lady Bombers on Friday, July 30.

The team then bowed out with a 1-0 setback to Team NC Huss on Sunday, August 1.

Johnston finished with five singles and one double among 15 at bats. She also contributed five runs scored, two walks, one hit by pitch, reached base on an error twice and stole two bases.

In addition to that, Johnston did not commit an error.