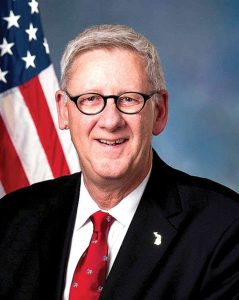 While a staunch Republican for many years, he separated himself from the GOP following Donald Trump’s claims of voter fraud after he lost the 2020 Presidential election.

Among those who respected Mitchell for his high principles and personal integrity was Michigan 82nd District House of Rep. Gary Howell of North Branch.

“Paul Mitchell deserves to be remembered as a man with the courage of his convictions,” Howell said. “He was not afraid to go against prevailing opinion when he disagreed.

“More importantly,” said Howell, “he represented his constituents with that same determination.”

Howell added that Mitchell was a strong advocate for individual rights and was able to stand up to wealthy corporations.

“He was a strong ally in the fight of local citizen control,” said Howell, “as exemplified by his defending the citizens of Metamora and Dryden from the corporate greed of a mega-gravel company.

“Paul was a good man. It was a real honor to know and work with him.”

“Today we mourn the passing of former Rep. Paul Mitchell, who was an advocate for improving Michigan’s 10th Congressional District during his time in office. My thoughts and prayers are with Paul’s wife Sherry and the entire Mitchell family,” said Rep. Lisa McClain who succeeded him in representing Michigan’s 10th District.

“I am deeply saddened to learn of Congressman Mitchell’s passing – a public servant who will be remembered for standing up for our democracy. Paul refused to throw away his integrity to earn political points, and while we may have disagreed on many issues, I will always respect and admire him for his commitment to doing what was right until the very end. My thoughts remain with his loved ones.”