IMLAY CITY — Construction delays will result in an extra week of summer vacation for Imlay City students. On Tuesday, August 10, district officials announced that the first day of classes for the 2021-22 school year will be Monday, August 30. Previously, the plan had been for classes to resume on August 23.
A number of major construction projects, made possible by a 2019 bond measure, have been in progress since the spring, some even before classes let out for the summer in June. Those include the addition of six classrooms at Weston Elementary and a new performing arts center at the high school. Additionally, Weston Elementary is relocating their playground and expanding their parking lot. Other projects have included the installation of new lockers, flooring, doors and windows, technology upgrades and other items district-wide. The classroom addition is expected to be complete sometime this fall and the performing arts center won’t be ready for use until next fall. 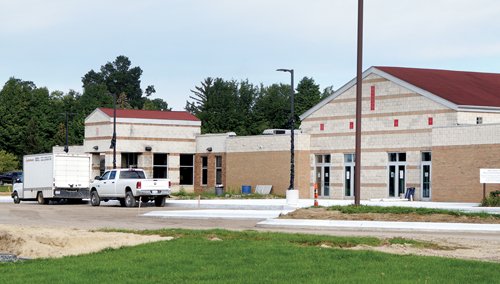 New curbs and sidewalk are in place at Weston Elementary while the newly expanded parking lot awaits paving.

At the board of education’s meeting in July, Supt. Dr. Stu Cameron told members that contractors were encountering delays due to weather and material shortages including issues caused by the pandemic like delayed manufacture or delivery. The district was anticipating a tight timeline in regards to the high school where the southwest stairwell project was delayed due to weather, Cameron said.

As a result of the delay, the tentative last day of school for students is now Thursday, June 16 instead of the original June 10.

A similar situation unfolded for the district one year ago but for different reasons. Due to a higher-than-expected enrollment in their virtual programs, Imlay City Schools pushed their start date for the 2020-21 school year by one week when there was a larger-than-anticipated interest in their Virtual Learning Academy. That meant school staff needed additional time to prepare equipment, namely Chromebooks, for students to use for remote learning, something that had been in high demand due to the COVID-19 pandemic.

All other districts in the Tri-City area are scheduled to start classes next week with Almont and Dryden returning to the classroom on Monday, August 23 and Capac returning on Tuesday, August 24.

Look for stories on what those districts have done to prepare in this edition of the Tri-City Times.