Dozens of perennials, shrubs planted next to train depot 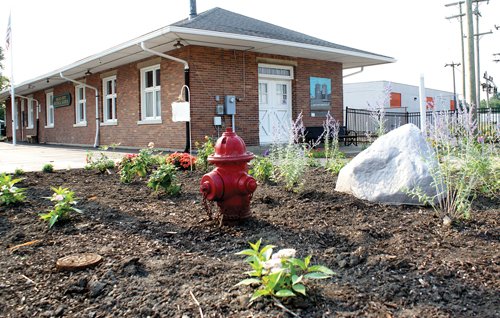 The large garden area adjacent to the historical museum is resplendent with colorful new growth planted by local floral designer Debbie Archambault on behalf of the Imlay City DDA.

IMLAY CITY — What would Imlay City’s 150th anniversary party be without planting a Sesquicentennial Flower Garden?

Doing the honors this week was floral designer Debbie Archambault, who was trained for the enviable task at the Lapeer County Ed-Tech Center.

On Tuesday, Aug. 3, Archambault could be found planting dozens of annual and perennial flowers and shrubs in the large garden next to the Imlay City Historical Museum at the foot of Main Street.

She was working at the behest of the Imlay City DDA, with the financial support, donations and product discounts provided by local businesses, including Earthly Arts, Super and Sons Nursery and Landscape, and Lapeer Home Depot, which donated 20 bags of mulch for the project.

“I wanted our local businesses to be part of the sesquicentennial garden project,” Archambault said. “This town was built by hardworking small businesses, which is also worth celebrating.”

Though Earthly Arts is currently closed for the season, she thanked Lee Super of Super and Sons for his and their involvement.

“They were instrumental in setting aside the shrubs and perennials I wanted to install,” she said. “They also donated the Hollytone for the shrubs.”

Archambault said she’s been interested in planting and growing things since a very young age — including growing her own food.

“That was the way we were raised and now it’s what I like to do,” she said.

“It is my hope that this is an all-seasons garden with blooms from April through November,” she said. “I planted these knowing it takes 3-5 years for each plant and shrub to get properly acclimated to their new surroundings and to fill in the areas around them.”