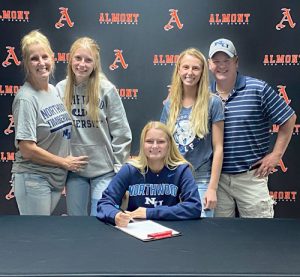 Brandi Kautz signs her letter of intent with Northwood as her mom Susie, sisters Jesse and Tyler, and dad Devin look on.

This past fall Kautz attracted their attention by averaging 83.1 per 18-hole round for Almont.

She shot her best score, a 75, en route to medalist honors at the Blue Water Area Conference Championship.

She also ranked fifth with an 86 during the Lapeer Tuneup at Lapeer Country Club; attained fifth medalist status among 107 contestants with an 81 at the Division 4 state finals hosted by Forest Akers West Golf Course in East Lansing; was fifth with an 80 during the Fourth Annual Byron Eagles Fall Shootout at Hunter’s Ridge in Howell; tied for 10th of 72 competitors with an 82 during the Troy Invitational at Twin Lakes Golf Course; plus added a 37th out of 72 participants at the Lady Falcon Invite at Stony Creek Metropark.

She wrapped up her senior season as an All-Blue Water Area Conference (she was voted the League MVP) and All-State selection.

As a junior, Kautz was named her conference’s MVP.

This was her fourth season on Almont’s squad.