Hellebuyck to play golf in college 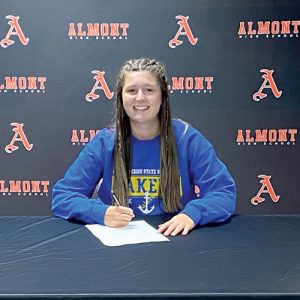 Last fall Hellebuyck provided Almont with a 93.6 average per 18-hole round.

She posted her best round, an 87, on the way to an 11th among 107 competitors at the Division 4 state finals.

Forest Akers West Golf Course, in East Lansing, is where the tournament was contested.

Hellebuyck also shot an 88 for second during the Blue Water Area Conference Tournament contested at Holly Meadows Golf Course in Capac; tied for fifth out of 42 participants with a 94 at a Division 4 regional hosted by Washtenaw Golf Club; furnished an 89 for 12th among 71 competitors at the Fourth Annual Byron Eagles Fall Shootout at Hunter’s Ridge in Howell; carded a 97 for 17th during the Lapeer Tuneup at Lapeer Country Club; plus tacked on ties for 27th at the Stony Creek Metropark-based Lady Falcon (she shot a 91) and Twin Lakes Golf Course-based Troy Invitational (she contributed a 92).

This was her fourth year on Almont’s squad.