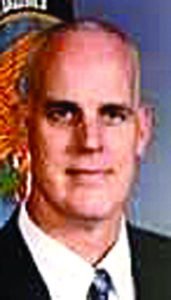 IMLAY CITY — City Manager Craig Horton announced on Thursday, Aug. 5, that Brett D. Selby has been hired to serve as the city’s new full-time police chief
Horton said Selby will serve as an at-will employee and will not be under contract with the City of Imlay City.

Selby comes to Imlay City with more than 25 years of police experience; five of which were as police chief in Southgate.

“Brett’s education and training background were just two of the additional reasons he was chosen,” Horton said.

Selby was one of two finalists for the full-time post, which was left vacant by the retirement of former Chief Scott Pike on April 30.

The other finalist was Lt. Jeff Daniel, who recently retired from the Shelby Twp. Police Dept. and who had also served more than 25 years in law enforcement.

“It was a very hard decision because we had an excellent pool of candidates,” Horton added. “We look forward to many years of his leadership in our police department.”

Selby’s law enforcement education includes attending the FBI Academy; a Bachelor’s of Science degree in economics from Central Michigan University; Police Staff and Command degree and Master’s degree in Public Safety and Emergency Management from Eastern Michigan University; and a degree in organizational leadership from the University of Virginia.

Since 2014, Selby has served as reserve coordinator and adjunct professor at the Oakland Police Academy.

In his biography, Selby described himself as an adaptable leader and analytical manager with a proven track record for developing and implementing training programs and initiatives that drive growth and education among police officers.

Additionally, he is adept at allocating resources strategically and optimizing departmental effectiveness.

Ron Krueger served as the city’s interim police chief following Pike’s departure and helped lead the search for a new chief. Krueger resigned from his post last month and since then Sgt. Sean Leathers has filled the interim position.