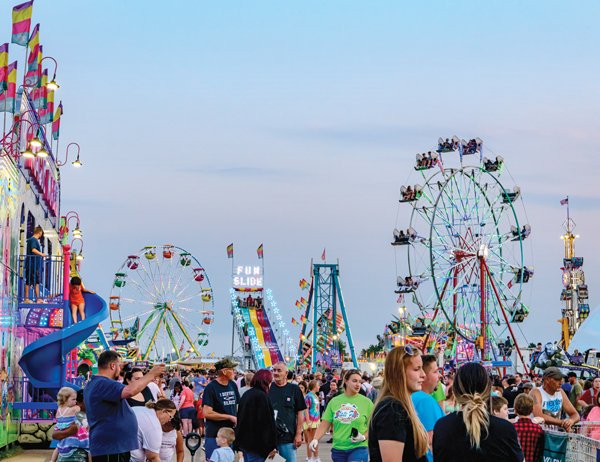 A large crowd strolls through the midway on Saturday evening.

“It was a huge fair,” said Fair Manager Ian Kempf.

“We knew we were going to get hit hard because of the post-COVID year with fairs being closed but we had no idea it would be this big.”

He reports that gate attendance was up 32 percent from 2019 and 2019 had been the fair’s second biggest year on record, until last week.

“The weather couldn’t have been better. It was beautiful and most of the days it was cool with a nice breeze.”

Kempf reports that all events went smoothly and fairgoers were well-behaved.

“We had absolutely no incidents on the fairgrounds at all. It was one of the smoothest years we’ve ever had.”

Kempf said he and other fair board members received multiple comments from people who were happy to see the fair return after a hiatus in 2020 due to the pandemic.

“The new grandstands worked out beautifully and the dome did as well…it was a popular spot throughout the week,” Kempf said.

The fair board presented Kempf with a plaque last week in honor of his 25 years as fair manager.