Joe DeLuca caps off his career as officer

IMLAY CITY  — After 31 years of service to the community, Police Officer Joe DeLuca retired from the Imlay City Police Dept. on Friday, July 30.

For those feeling sentimental, DeLuca will not be far away.

Having long served as the police department’s Schools Resource Officer (SRO), DeLuca will be assuming the position of Dean at the Imlay City Middle School in August. 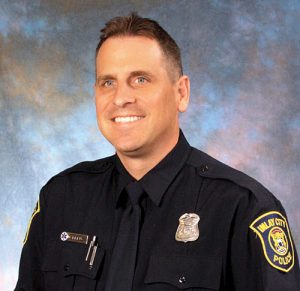 Joe DeLuca will be taking his knowledge and experience to Imlay City Middle School, where he will be Dean of Students.

“I want to thank the citizens of Imlay City for all your years of unwavering support. I certainly will always cherish the friendships that I have gained over all these years,” DeLuca said in a post on the department’s Facebook page.

DeLuca graduated from Ferris State University in 1989, with a Bachelor of Science degree majoring in criminal justice.

By December of 1989, DeLuca was hired as a patrol officer with the Imlay City Police Department.

In was in 1995 that Officer DeLuca accepted the School Resource Officer position with the school district and began the D.A.R.E (Drug Abuse Resistance Education) program.

He later implemented the T.E.A.M (Teaching Education and Mentoring) program for students in 2nd, 5th and 7th grades.

For his continuum of service on behalf of local students, the Imlay City Board of Education awarded DeLuca with the “Friend of Youth” award in 2004; and honored him at that year’s Thumb Meet of Champions.

DeLuca espouses the importance of positive role models in the lives of young people.

Over the years, he has coached youth football and currently AYSO soccer.

Meanwhile, DeLuca spends much of his off-duty time supporting his own and other children’s activities, including club soccer, AYSO soccer, gymnastics and dance, and volunteering and fundraising for non-profit charities throughout Lapeer County.

Editor’s note: The Tri-City Times will feature an article on Officer DeLuca’s long and distinguished career in a future edition.