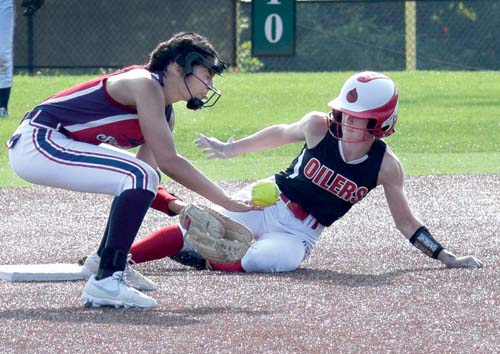 Lexa Forti slides beats a throw to the base for the Foster Oilers 14U softball squad.

TRI-CITY AREA — The Foster Oilers 14U softball team, which lists Imlay City’s Lexa Forti and Almont’s Lydia Lacavera on its roster, went 2-3 at the Storm Summer Classic this past week.

Byron Center is where the games were contested.

They got their tournament stint underway Friday with a 4-0 loss to Lakeshore Storm 14U Sleeman.

Later that day, the team fell to 0-2 with a 9-6 setback to Midland Lady Explorers Miller.

Saturday’s action Foster Oilers bounce back with a 6-5 win against South Coast Blues ’06 and obtain an 8-0 victory over Turnin 2 14U Koch.

The team then exited tournament play with a 7-0 setback to Attack ’07.