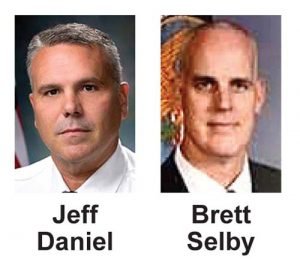 Horton said Daniel and Selby were interviewed by the committee on July 20, and will be interviewed again by the full city commission on Tuesday, Aug. 3.

Jeff Daniel began his 26-plus years in law enforcement in 1995, starting as a corrections deputy with the Oakland County Sheriff’s Office.

He recently retired as a lieutenant with the Shelby department, where his duties included running patrol shift, communications unit and traffic bureau; while also serving as Deputy Director of Emergency Management.

During the COVID-19 epidemic Lt. Daniel helped lead the township in revising policies and procuring PPE for the township.

He has served as a ‘use of force’ instructor, motorcycle instructor, police academy coordinator, EVO instructor, Honor Guard and conducted numerous internal investigations.

Additionally, he has served on the Governor’s Traffic Safety Advisory Commission and as Chairman of the Distracted Driving Action Team.

Lt. Daniel earned his Bachelor’s Degree in Criminal Justice from Saginaw Valley State University while competing in track and field in the hammer throw and shot put.

He is also a graduate of Northwestern University’s Police Staff and Command Class 393.

Brett Selby, who retired as Southgate‘s Police Chief in January of 2020, has more than 25 years experience in the field of law enforcement.

Since 2014, Selby has served as reserve coodinator and adjunct professor at the Oakland Police Academy.

Selby describes himself as adaptable leader and analytical manager with a proven track record for developing and implementing training programs and initiatives that drive growth and education among police officers.

He added that he is adept at allocating resources strategically to optimize departmental effectiveness.

The city is seeking a successor for Scott Pike, who resigned his full-time post on April 30.

As a matter of note, Interim Police Chief Ron Krueger stepped down from his position two weeks ago.