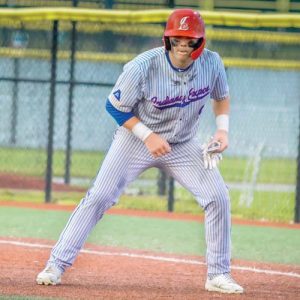 Almont’s Kylar Fisher leads off first base during his tournament in Ohio.

ALMONT — The Indiana Expos National 17U baseball squad, which counts Almont’s Kylar Fisher among their ranks, posted a 4-1 mark at the Pastime 17 National Champioship this past week.

Xavier University, in Cincinnati, Ohio, served as the tournament venue.

The team began tournament action Thursday with a 13-2 win against Motor City 17U.

Friday’s action saw the team register a 9-0 triumph against 5 Star Great Lakes Chiefs and obtainexd a 4-1 win over Y’all’s Elite.

The following day the Indiana Expos dropped a 2-1 verdict to Demand Command, ending their tournament run.

Fisher wound up five for 13 hitting for the team over five-game stretch. He also contibuted seven runs scored, six RBI and five walks to his team’s cause.

The Indiana Expos return to action August 4-8 when they compete at the Cincinnati Flamers Tourney.