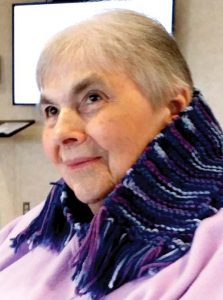 Deanna Snoddy, age 83, of Lapeer (formerly of Imlay City), MI died Tuesday, July 20, 2021 at Lapeer County Medical Care Facility (Suncrest) in Lapeer, MI. Deanna Dayton was born November 7, 1937 in Imlay City, MI. She was the daughter of the late Agnes (Dayton) Warner. Deanna was a graduate of Imlay City High School, Class of 1955. After high school, she attended nurse’s training school at Hurley Hospital. Deanna married Robert Snoddy on October 15, 1958 in Flint, MI. She was preceded in death by her husband, Robert, on May 14, 1975.

She was a homemaker, raising her family.

Deanna was a member of Suncrest Auxiliary and assisted with fundraising for the auxiliary group. She enjoyed crocheting afghans for her children and keeping current with classmates.

Deanna was preceded in death by her husband, Robert Snoddy; daughter, Kelly Snoddy; mother Agnes Warner; and her grandparents, John and Carrie Dayton.

A Celebration of Deanna’s life is being planned for Saturday, September 25, 2021 at Suncrest.

Please be sure to sign the online register at muirbrothersfh.com to share condolences and memories with the Snoddy family.