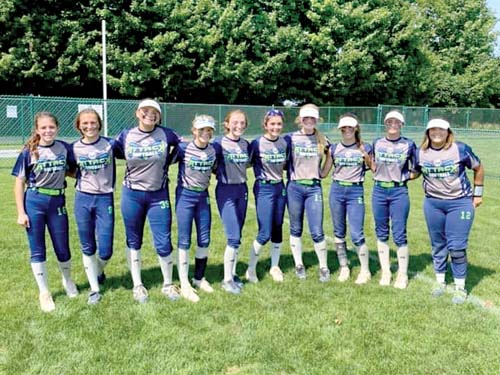 ALMONT — Attack’s 14U softball squad fashioned a 5-1 mark at the Lakeshore Summer Classic this past week.

Byron Center is where the action unfolded.

Attack started things off in the 24-team tournament Friday with an 8-1 victory over Downriver Diamonds 14U.

Later that day, Attack improved to 2-0 with a 4-0 triumph against Interlakes Pride Heer 13U.

They would play just once Saturday, earning an 11-2 win over Lakeshore Storm Korf.

Sunday’s action saw the team notch a 7-0 victory against Foster Oilers 14U Black.

They then followed it up with a 9-6 triumph over 906 Fastpitch, before bowing absorbing an 8-7 semifinal setback (falling in the international tiebreaker) to Mid Michigan Chaos.

Lainey Cannon (Clio) led the team with an .818 average. Her performance included seven RBI and a home run.

Sophia Helm (Swartz Creek) hit .533 with a seven RBI and a homer.

Jaycee Reams (Algonac) and Ashley Stafford (Richmond) both hit over .400.

Cannon and Reams each had two wins pitching and 29 strikeouts.

The team closed out the year as owners of an outstanding 55-11-2 mark.