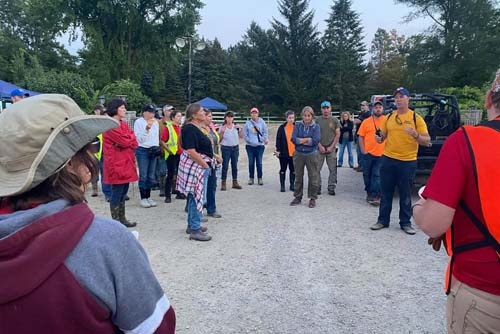 Volunteer receive instructions at the search’s Casey Road base before heading out to search for Joe Mindelli earlier this week. On Thursday morning, it was announced the search had extended into Almont Township. Photo provided by Grace Rheaume

DRYDEN — Dryden Township, along with groups from around the state of Michigan, continue to support the search for Joseph Mindelli.

Joseph (Joe) Mindelli was reported as a missing person to the Dryden Township Police Department on Monday, July 19 at 1:52 pm. Diane Mindelli, Joe’s wife, realized he was not in their Dryden Township home in the earlier hours of July 19, however given that Joe often takes early morning walks on and around their 10-acre property, she was not immediately concerned. After a bit of time she contacted family members and as their concerns began to grow, family, close friends and neighbors began to search for Joe. Not too long after they decided to reach out to the police department.

In less than 24 hours several members of the Dryden Township community, Dryden Township Police Department and beyond
joined in on the efforts. By Tuesday morning an official gridsearch was planned. Volunteers were instructed to sign up at the Wesleyan Church in Dryden and then would be called to Casey Road where the Mindelli’s reside. From there teams were built and sent out on foot to search in specific areas with a goal of covering every bit of ground, especially the mile and a half radius surrounding the Mindellil’s home.

Shawn Peters, Chief of Police for Dryden Township, shared that as of Wednesday, July 21 their search efforts had included drone technology, thermal imaging, flare imaging, Black hawk helicopters, helicopters from the US Coast Guard, Michigan State Police and the Oakland County Sheriff helicopter. Peters continued on to say that the search has been conducted on foot, in the air, on ATV units, equestrian units and search and rescue teams had joined all the way from Alpena to Coldwater, Michigan.

“We’ve covered in some capacity search either by air, drone or on foot probably 22 of the 36 square miles of Dryden,” Peters said.

The plan for Wednesday evening remained the same as Tuesday evening—that search and rescue teams return with K9s as well as thermal vision equipment with the volunteer search to continue first thing Thursday morning.

The Dryden Township Police Department has used their resources and pulled from several other departments and while some equipment has to be returned within a given amount of time Peters says, “we’ll keep trudging along with as much as we have.”

Peters is certain that no matter what, the family and community will continue to search for Joe.

“We’re not going to stop people from coming out and volunteering, we appreciate that.”

Susie Grondin Kage of Dryden was one among nearly 400 on foot volunteers on Tuesday.

“I was signed up with perfect strangers to me but we all had the same goal…we went up to people’s doors and asked them to check their barns and outbuildings. Most of them hadn’t even heard about Joe but were all very concerned and willing to help,” Kage said.

Peters is grateful to the community, search and rescue teams and police departments from all over the state of Michigan as their support and efforts have been tremendous.

“We don’t really worry about borders or what color somebody’s uniform is, we just want to get the job done,” he said.

Unfortunately, as of 11:45 p.m. on Wednesday, July 21 Joe Mindelli still had not been found. The Dryden Township Police Department and the Mindelli family ask for continued support and volunteers in the search. The volunteer search will continue on Thursday morning. Those able to join the efforts can meet at the Wesleyan Church at any time they are available,
per Kristyn Theobald, Joe’s daughter.

Peters said the terrain of Dryden is thick and very difficult to get through and he encourages volunteers to dress properly in bright long clothing and boots.

Mr. Mindelli is entered into the Law Enforcement Information Network as a missing person. It is urged that everyone in the area check their property, outbuildings, trail cameras, deer blinds, etc. Anyone who sees Mr. Mindelli is urged to call the Dryden Township Police Department at (810)796-2271.