IMLAY TWP. — It stands to reason that Paula Walton feels a connection with the earth.

She and her husband Lynn are longtime residents who farm the land near their Weyer Road home.

Throughout the years—whether strolling the land or tilling it up for farming—Paula has stumbled across a number of interesting rocks and stones. The most intriguing finds—fossils and such—end up decorating the beds of several colorful flower gardens around the family home. 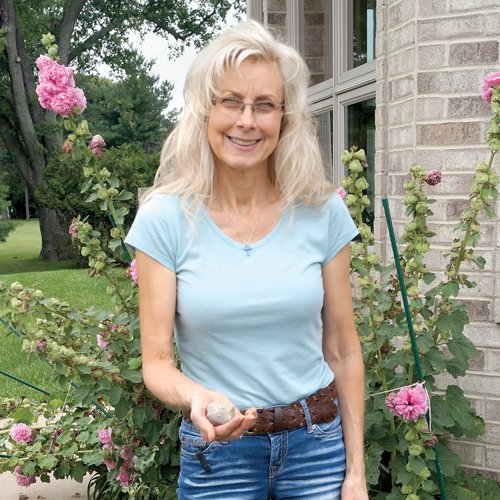 Paula Walton stands amongst the blooms of double hollyhock flowers with unique stone she found around the property.

So when friends Norm and Debbie Tanis dropped by in the spring and mentioned a study program going on at the Imlay City Christian School, Paula pulled out one of her best finds: an unusual, oval-shaped pinkish-colored fossil, pitted and dotted with shiny crystal flecks.

Paula ran across the rock as she strolled around the farm with her daughter Jessica, son-in-law Kaleb and grandson Rhett. It was among a large shipment of stones dug from a gravel pit and brought in to amend Lynn’s helicopter hangar.

Sun glinted off its shiny surface and the sparkling light caught Paula’s eye. Upon closer examination, she determined it was a keeper and added it to her collection of fossils and rocks.

“I’d set it in the flower bed where I put it last summer when I found it,” Paula says. “So when Norm and Debbie mentioned that the Christian school students were studying fossils I said ‘let me show you this one.’”

They were impressed with the unique rock. Norm and Debbie passed it along to the school, as well as a few others Paula retrieved from the garden bed.

The students and teacher studied the rock. Its oval shape resembled the head of a turtle, and everyone thought that’s what the fossil most likely was until they discussed an area that resembled teeth.

Debbie had performed a quick Google search, which shot the turtle theory down. She confirmed that the prehistoric reptiles didn’t have teeth.

When the Tanises returned the stone to Paula, Norm passed along an observation.

“This could potentially be a baby dinosaur,” he said. “Debbie looked it up and turtles definitely do not have teeth.”

Indeed, an area of the stone appears to have teeth-like indentations, above which could be perceived as an eye socket. Most would agree that the palm-sized fossil resembles that of some sort of reptile head.

The unique find joins several others Paula has collected over the years on the farm. She found two almost perfectly-rounded stones that may be the inner core of a stick ball. Stick ball was a popular game among Native Americans in the 18th century. The war-like contest required speed, agility and perseverance. The ball was made with hide stitched up around a small stone core and stuffed with deer hair. Players manipulated the ball with two-and-a-half foot hickory sticks.

Paula also discovered what appears to be two meteorites along her travels.

Most of her finds end up in the garden beds—which Paula enjoys tending to when she has time.

She welcomes any and all information and or speculation regarding the “turtle head/baby dino” stone as it is among one of her most interesting finds.

Email tct@pageone-inc.com with ‘fossil’ in the subject line or call Tri-City Times Editor Maria Brown at 810-724-2615 to pass along information.