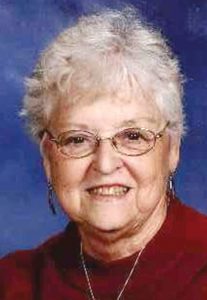 Sarah Weingartz, age 86, of Attica, MI died suddenly Saturday, July 17, 2021 at her home. Sarah R. Dennis was born September 15, 1934 in Attica Twp., MI. She was the daughter of the late Ulysses “Jake” and the late Verna (White) Dennis. Sarah grew up and lived all of her life in the Attica area. She was a graduate of Lapeer High School, Class of 1952. Sarah graduated in 1953 from Flint School of Business, specializing in Comptometers.

Sarah married Bernard “Bernie” Weingartz on May 7, 1955 in Imlay City, Michigan. Bernie died on October 31, 1998. Sarah worked as a secretary and bookkeeper for Sacred Heart Catholic Church in Imlay City for 35 years. She then worked for 20 more years as a Receptionist Plus for Muir Brothers Funeral Home of Imlay City. Earlier on in her career, she had worked at Buick Motors in Flint, Lapeer County Co-op in Imlay City and Lapeer, and at Riley’s Men’s Wear in Imlay City.

Sarah was a member of Sacred Heart and St. Cornelius Catholic Churches, the Altar Society at Sacred Heart, the Society of Hope and Charity, the Women of St. Cornelius, St. Cornelius’ SAPs (Senior Adult Program), and the Imlay City Historical Society.

Sarah was preceded in death by her husband, Bernie Weingartz; her sister, Juanita (Bob) LaVene; and her brother, Ulysses “Jake” Dennis.

Those wishing to make memorial contributions may direct them to the Shriners’ Children’s Hospital.

Be sure to sign the online register book at muirbrothersfh.com to share your memories and condolences with the Weingartz family.