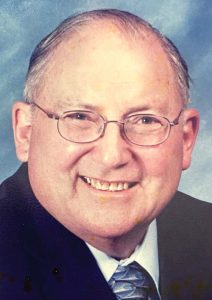 Richard Haskins, age 89, of Imlay City, MI died Thursday, July 8, 2021 at McLaren Lapeer Region Hospital. Richard Lee Haskins was born June 28, 1932 in Shiawassee Township, MI. He was the son of the late Morris and the late Nola Ruth (Ade) Haskins. Richard grew up in Byron, MI; the family moved to the Romeo area when he was a teenager. He attended Romeo High School.

He married Irene Isabelle Smith on July 8, 1950 in Romeo, MI. His wife, Irene, died in 2019. He and Irene moved to the Almont area shortly after their marriage. They moved to Imlay City in 1978. Only recently did Richard move to Attica for a short time and was at Suncrest Nursing Home in Lapeer for even a shorter time.

Richard retired from the Detroit News and Detroit Free Press Newspaper Delivery Service after nearly 35 years. He worked at Ford Motor Sterling Plant for 16 years; the U.S. Post Office Mail Dispatch and Delivery Service; L& L Products for a while; and he helped build silos for farmers when only a teenager. Richard was a deacon at the Almont First Baptist Church and was physically involved in the First Baptist Church’s construction back in 1968.

Richard was preceded in death by his wife, Irene in 2019; sister, Patricia; and brothers, James and Tom.

Those wishing to make memorial contributions may direct them to the First Baptist Church of Almont.

Please be sure to sign the online register book at muirbrothersfh.com to share your memories and condolences with the Haskins family.