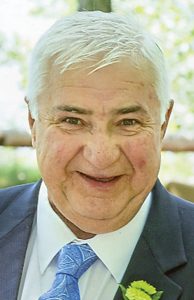 He was born in Almont, September 30, 1947, the son of the late Christopher and Stella (Neumayer) Schwartzkopf.

His marriage to Bonnie Hoffman was June 16, 1979, at St. John’s Lutheran Church, Capac.

“Jim” grew up in Capac where he was baptized at the St. John’s Lutheran Church, Capac. He was in the Boy Scouts of America, had earned the Port Huron Times Herald Newspaper Award, and was a 1966 Capac High School graduate. Jim had worked several jobs, including the Shell gas station in Yale and the Dodge dealership in Capac. Jim was a former service and parts manager for Rinke Chevrolet in St. Clair and Eagle Chrysler Dodge in Port Huron, He had worked at his brother’s car washes in Imlay City, Burton and Capac before his retirement in 2005.

Jim sang with the men’s group “Gentlemen Songsters” (formerly the Chevrolet Glee Club) at nursing homes, assisted living facilities, and at the Capac Historical Society Museum, where he was also a member. Jim was known by all as the “nice guy” and he dearly loved his family and spending time with them.

Surviving in addition to Bonnie, his wife of 42 years; are two daughters, Kristen Schwartzkopf of Memphis and Emily Schwartzkopf of Marquette; three grandchildren, Allison, Reese and Lincoln; as well as many nieces, nephews, grand-nieces, grand-nephews, and friends.

The family honors the memory of James and invites you to visit and share memories Friday, July 23, 2021 from 10-11 a.m. at the Capac Historical Society Museum, 401 E. Kempf Ct., Capac, with memorial services at 11 a.m. visiting. Rev. Peggy Barry Bartz will officiate.

In lieu of flowers memorials are suggested to Capac Historical Society.