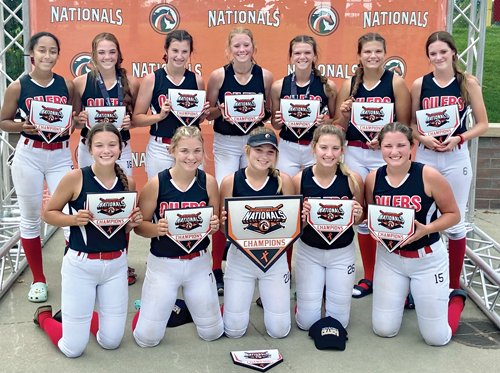 Almont’s Lydia Lacavera (back row third from left) and Imlay City’s Lexa Forti (back row fifth from left) helped their team to a top finish at Youth Nationals in Kentucky.

The team started things off Sunday, July 11 with a 5-4 loss to Chaos Landow (Villanova, Pennsylvania).

The following day Foster Oilers bounced back with an 11-2 win against Signature Wolff/Fuhr (Indianapolis, Indiana) and an 11-0 victory over Muskego Storm (Muskego, Wisconsin).

That left them as the number two seed at the completion of pool play.

That landed Foster Oilers a championship game appearance where they squared off versus Rowdie Katz (Morris, Illinois).

When the final scores were added up, Foster Oilers had prevailed 8-6.