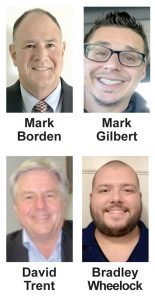 ALMONT — The field of 32 candidates interested in becoming Almont’s next village manager has been narrowed to four. The finalists will appear before the village council tonight, Wed., July 21, for interviews and residents are welcome to attend.

According to a press release from Amy Cell Talent, the agency tapped to lead the manager search, the candidates are Mark Borden, Mark Gilbert, David Trent and Bradley Wheelock and all four will be interviewed between 6-9 p.m. in an open session meeting.

“Residents are encouraged to attend the meeting or watch the video link available later on the village’s website,” the press release stated.

Mark Borden has worked in the healthcare administration and city government sectors, serving previously as Carson City’s city administrator between 2008 and 2014.

Mark Gilbert has worked in law enforcement for the last 10 years and has experience in local government administration, working on a contractual basis.

Gilbert earned a Bachelor of Science in Criminal Justice from Wayne State University and a Master of Public Administration Degree from Oakland University. He is currently working towards completing his Master’s of Business Administration from Walsh College.

David Trent has served as village manager for Grass Lake since 2017 and currently sits on the Salem Township board. Previously, Trent worked for General Motors in quality assurance and started his own consulting and sales firm. He’s earned a Bachelor of Business Administration from Eastern Michigan University and an Associate’s of Arts degree f rom Schoolcraft College.

Bradley Wheelock has previous experience as a campaign manager and volunteer organizer.

He holds a Master of Public Administration degree and a Bachelor of Science degree from Eastern Michigan University.

This is the second time the village has undertaken a search for a new manager since Mike Connors stepped down from the job in early 2020. After council members weren’t satisfied with the candidate pool the first time around, they opted to hire Amy Cell Talent, a talent acquisition and human resources management firm located in Ypsilanti. The firm most recently helped Lapeer County hire Quentin Bishop as their new controller/administrator.

Ian Kempf has been serving as the interim manager since February of this year.