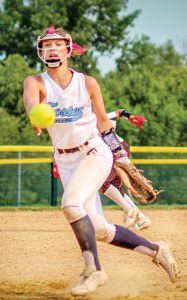 IMLAY CITY — Foster Oilers 16U softball team, which counts Imlay City’s Jaya Forti among their ranks, made it to the semifinal round before bowing out at the Northern Illinois Lightning 2021 Radtke Memorial Tournament July 2-3 in Chicago, Illinois.

The team started things off Friday, July 2 with an 8-3 loss to Wasco Diamonds 16U.

Later that day, Foster Oilers dropped a 2-1 verdict to Wheatland Spikes ’05 and was handed a 13-0 setback by Elk Grove Heat ’05.

The following day saw the team bounce back with an 8-3 win against AHQ Fastpitch 16U.

That contest left them 1-3 at the end of pool play.

Foster Oilers then picked up a 3-2 victory over Oak Park Windmills 16U; registered a 5-2 win against Finesse Finesse 16U and absorbed a 1-0 semifinal loss to Wasco Diamonds 16U.