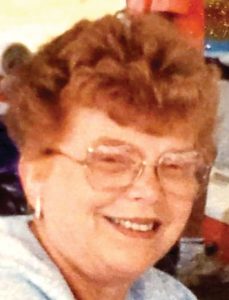 Doris Turner, age 89, of Imlay City, formerly of Stockbridge and Almont, MI died Saturday, July 10, 2021 at McLaren Lapeer Region of Lapeer, MI. Doris Mae Turner was born April 4, 1932 in Cadillac, MI. She was the daughter of the late Irvine and the late Mary (Rennels) Turner. Doris grew up in Marion, MI and was a graduate of Marion High School, Class of 1950. She also graduated from the Lansing Business School – Secretarial Program.

Doris lived with her mother and stepfather in Stockbridge, MI. Her mother passed away in 1953 and Doris continued to live in Stockbridge with her stepfather until his death in 1982. After her stepfather’s death, she moved to Almont, MI for a period of time before moving to Imlay City to live at Casa Maria (now, Sanctuary at Maple Vista). Doris retired as a secretary at the D & C Department Stores – Main Office in Stockbridge. Doris enjoyed bowling and was very good at it. She loved to travel. She was an incredible cook. Doris was a member of the Almont/Dryden Lioness Club.

She is survived by nephews, Ted (Amy) Sadler of Imlay City, MI and Tim (Teena) Sadler of Almont, MI; and by several great-nieces and great-nephews. Doris was preceded in death by her sister and brother-in-law, Nola (Tom) Sadler; a nephew, Tom Sadler; and a niece, Mari Sadler.

The family will be available for visiting hours from 3-5 p.m. Thursday, July 15, 2021 at Muir Brothers Funeral Home of Imlay City. Doris’ cremated remains will be interred with her parents at a cemetery near Marion, MI.

Those wishing to make memorial contributions may direct them to the Almont/Dryden Lion’s Club at P.O. Box 141, Almont, MI 48003.