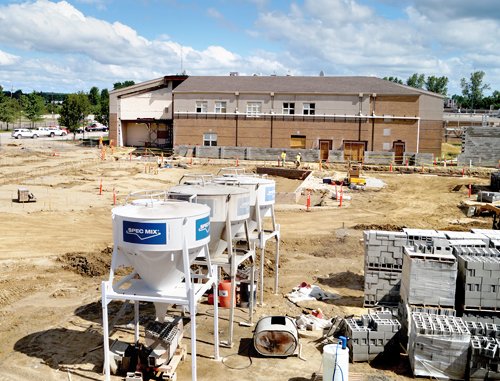 IMLAY CITY — If one phrase could define the summer months at Imlay City Schools it would have to be “under construction.” The district is deep into their long list of 2019 bond projects, meaning nearly every nook and cranny of all four school buildings is experiencing some kind of upgrade, replacement or addition.

The summer’s biggest projects are underway at Weston Elementary and the high school where additions and new secure entryways are being built.

“Laying of the foundation at the Performing Arts Center is 85 percent complete and masonry work is underway,” Supt. Dr. Stu Cameron said of the addition at the high school.

“Access points from the main building have been opened and demolition and installation of the dressing room areas has begun.”

A few weeks ago the school’s southwest stairwell was demolished to make way for the addition. Work on the performing arts center—a 500-seat facility—will continue for another year with a fall 2022 completion date.

Additionally, the high school will get all new flooring in the classrooms and hallways and new sinks and flooring in the bathrooms. The backstage area of the auditeria will be remodeled and turned into a dedicated space for robotics. A new secure entrance will also be created, just south of the current main doors. It will require all guests to pass through the office before entering the school.

The same reconfiguration of the main entrance will also take place at Weston Elementary School. There, the entire Weston office will be relocated to the east of the main doors, creating a more secure entry. Lots is happening outside of the Weston building too. Two former first grade classrooms are being transformed into new office space. Weston’s playground has been dismantled and will be relocated to it’s new home west of the service drive. The space the playground used to utilize will be paved so as to expand parking and the parent pick-up loop.

Work is progressing on a new six classroom addition at Weston that will eventually house the school’s second grade classes. Although the district had hoped the addition would be ready for students and teachers when classes resume next month, Cameron said it will more likely be complete sometime in the fall.

At Borland Elementary, the installation of new exterior windows and doors is nearly complete. New flooring in its hallways and bathrooms is planned along with new lockers.

The Middle School is seeing the least amount of disruption this time around. A new boiler will be installed and existing lockers will be replaced.

District-wide summer projects include completion of interactive technology displays, a new phone system and upgrades to surveillance system cameras and hardware. Additionally, all the schools’ media centers will be remodeled into maker spaces with new carpeting, furniture and upgraded technology. These spaces will allow students to collaborate and work as teams on projects.

“We think these spaces will foster the element of discovery and that way of learning solidifies concepts in your brain kind of like how you learn by doing a DIY project at home,” Cameron said.

The maker spaces will still have books and comfortable seating while providing more open space for group work. He noted that the Weston media center will still function predominantly as a lending library, but will feature more technology access for student use.

“It’s been a relatively smooth project due to our point team at Barton Malow,” Cameron said at June’s school board meeting, referring to the district’s construction managers.

He noted that for the first time since bond work got underway, contractors are experiencing issues getting the materials they need—things like steel and insulation—due to pandemic backlogs.