ATTICA TWP. — After months of being closed due to the pandemic, the newly-refurbished Attica Museum has re-opened to visitors.

Formerly a maintenance building, the updated museum is located behind the Attica Township offices at 4350 Peppermill Rd., a quarter-mile west of Lake Pleasant Rd.

Last Thursday, Attica Museum Director Janet O’Donnell and four volunteers were on hand to welcome back visitors and take them on tours of the building.

Upgrades to the facility include a new epoxy floor and large addition to the west side of the building, which is dedicated to the preservation of numerous historic items salvaged from Attica schools.

One of them is an old school bell that when rung, conjures up memories for O’Donnell and others who remember its distinctive ring. 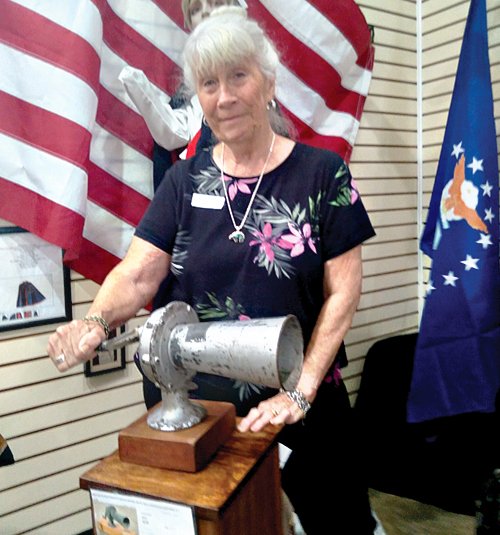 “The sound of that old bell still stirs back the memories and it takes me back to those times,” she said.

Among the visitors on Thursday were Almont Historical Society members Tom and Nancy Spencer, who moved from their former hometown to Attica about three years ago.

Tom Spencer said he and Nancy share an appreciation and love for the ingenuity, skills and creative talents of the artisans of past generations.

The Spencers also share a giving spirit and have been generous benefactors to the Attica museum over the years, frequently gifting the museum with unusual and rare items.

One of them is a 1905 Edison “shaving machine,” which drew the attention of several curious visitors.

That item and others were of interest to those who had not visited the museum in some time — or were viewing the museum for the first time.

“This is a collaborative effort and it involves a lot of people,” she pointed out. “We appreciate the support of our volunteers and the generosity of all of our donors.

“Every item in here is special and tells a story from the past,” O’Donnell continued. “We’re very proud of this museum, but wish we could get more people to come and see all the wonderful things we have on display.”

After more than a year of being closed because of the pandemic, O’Donnell and her fellow historians are reaching out to reconnect with Attica residents and anyone with a keen interest in learning about local history,

She is also interested in connecting with school-aged children who have yet to visit the museum.

“We need to get our local students to come to the museum and see what they’re missing,” she said. “We need to make that connection.”

She said the museum is currently in the process of arranging for a busload of (Lapeer County) Ed-tech students to pay a visit.

“This is a very special place,” O’Donnell opined. “Anyone who steps into this museum and sees what we have, will learn a lot about the people who have lived in Attica, have gone to school here, and those who’ve spent their entire lives here.”

The Attica Museum has regular hours on Thursdays from 9-11 a.m.; or on other days and at other times by appointment.

Interested parties can call the Attica Township Hall at 810-724-8126, visit the website at www.atticatownship.org or email to museumatticatownship@gmail.com

Also present for the museum open house was Attica Township Supervisor Al Ochadleus, who provided some details of the museum’s orgin and evolution.
Ochadleus said the township spent $20,000 in 2009 to transform the township’s former maintenance/mechanical building into a space to store historical artifacts and materials collected by the historical society.

“It turned out there was a treasure trove of historical items and information in that building,” Ochadleus said “Had it not been preserved at that time, it all might have been lost forever.”

In an effort to salvage and protect those items for and future generations, the Attica Township Board took bids in 2017, and later contracted with BAS Architects of Sterling Heights to build the museum’s 1,400-square-foot addition for $82,475.

The township utilized general fund money to pay for the project, which was completed in 2019.