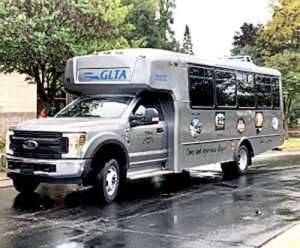 Dickens noted that the nonprofit’s grant application was inspired by the results of a 2019 4CCF Community Needs Assessment online survey.

In addition to the online survey, Dickens said area senior centers were visited to allow for paper and pencil surveys and verbal responses.

“Access to public transportation was among the top concerns identified by residents of Imlay City and Almont, Dickens said, “and prominently among our senior citizens.”

In response to the survey results, 4CCF held a large meeting of community stakeholders including medical professionals, government leaders, the Lapeer County Health Department and the Greater Lapeer Transportation Authority.

“All members agreed we should continue to work together to create a plan that would provide senior citizens more transportation options,” Dickens said. “Soon after, 4CCF applied for a Michigan Health Endowment Fund grant application and we were awarded the amount of $96,876.”

“The letters included examples of dangerous situations seniors had found themselves in when they did not have access to transportation,” said Dickens.
“One of them was from a practicing Imlay City physician who witnessed first-hand the struggles many of our senior citizens face; particularly their difficulties in accessing transportation to and from medical appointments.”

She noted an instance where a senior patient walked a great distance in inclement weather to get to a medical appointment, potentially further jeopardizing his health.

Dickens said the Michigan Health Endowment grant will be used to bring experts in to meet with the locally organized transportation collaborative.
Additionally, EasterSeals will facilitate the group and RLS & Associates will be responsible for researching local characteristics and assisting in creating a senior transportation plan.

Dickens said the various partners will form a collaborative group to create a successful and sustainable plan for the local area.

She added that the collaborative will research all Lapeer County townships that have public transportation needs; not just in the eastern portion of the county.

“This work will begin on July 27-28,” she said. “All stakeholders will work together to make that plan a reality for our seniors.”