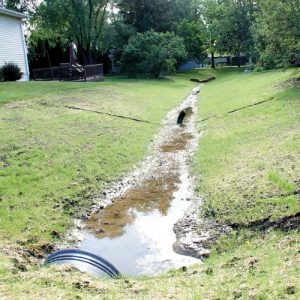 Property owner Wayne Russell said he was told in a letter that the drain pipe would be covered over, making it less invasive and even with his land.

ALMONT — Some residents living along the Stroup Drain in Almont are growing frustrated with the duration and physical impact of an ongoing drain project.

The $2.1 million Stroup Drain project was approved by local governmental entities in 2018, with the cost to be shared by Lapeer County ($633,000), Almont Township and Village ($211,000), and approved millage funds.

Sharing in the project’s cost are the owners of homes and properties that are located within the drain district.

Among them is Wayne Russell, who lives at 5127 Bernice St. in the Kay Lynn subdivision, adjacent to the Stroup Drain.

Russell said his property is being adversely impacted by the project, which broke ground more than a year ago.

It was in mid-May of 2018, that the Village of Almont petitioned the drain commission to construct and maintain the drain.

A month later Russell and others living in the Stroup Drain’s right-of-way were asked to sign easement agreements to give up portions of their properties to accommodate the construction.

After initially opting out of signing the agreement, Russell said he received correspondence from the Lapeer County Drain Commission Joe Suma, strongly encouraging him to comply.

“We were told if we did not sign the release, that the commissioner and county could take 30 feet of our property through the process of eminent domain,” Russell said.

Unwilling to relent, Russell said he and neighboring residents met with Suma, contractor Jim Novak of Novak Construction, and representatives from BMJ Engineers and Surveyors, for the purpose of discussing and better understanding the full scope and impact of the project.

Russell said that after talking with representatives from BMJ Engineers & Surveyors, it was his understanding that a pipe would be installed in the ditch and buried beneath dirt.

“Had they done that, I would still be able to cut my lawn and take care of the property,” Russell said.

Based on those and other expectations, on Feb. 17, 2020, Russell and his wife, Julie, signed an easement agreement they believed would protect their property and interests.

Russell said Suma had promised in a letter that work next to his house would take no longer than one week to complete, “pending weather conditions and factors outside the control of the contractor.” According to Russell, Suma’s letter also said any trees under six feet tall, or fencing that needs to be removed from his property, would also be replaced.

Additionally, any lawn areas or green spaces disturbed during the project would be replaced.

So far, Russell said those promises have not been kept, and now, what was once his lawn has been reduced to a muddy ditch.

Pending the resolution of his concerns, Russell and other neighbors affected by the project are considering taking legal action against Suma and the Lapeer County Drain Commission.

He has also reached out to 82nd District House Representative Gary Howell, in hopes that he will be assistive.

“The irony in all of this, is that we have to pay for this mess,” Russell concluded

Joe Suma admitted this week that the drain project has had its challenges, and is behind schedule.

“It looks now like this project won’t be completed until late October,” Suma said.

He said the project was designed and engineered to improve drainage and reduce the chances of flooding and damage to homes.

“Without good drainage, you don’t have residential properties,” said Suma. “This project is being constructed to meet the specs of the project engineer.”