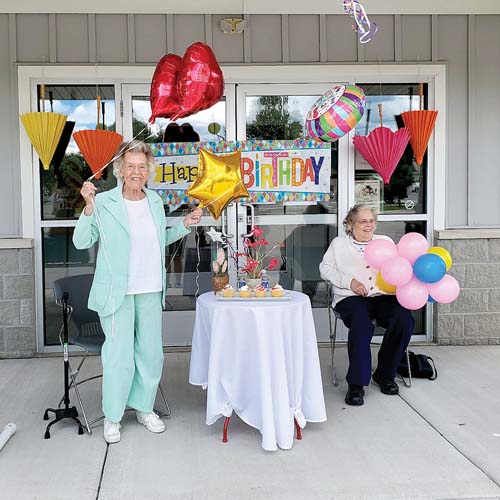 Betty Burgess and daughter, Kathy, take in the birthday parade festivities from the front porch of the Conrad Community Center last month.

CAPAC — It’s not often that someone turns 100 so Capac rose to the occasion last month in honor of longtime resident Betty Burgess who celebrated a century of life. Senior Center staff organized a birthday parade on June 22 that saw dozens of vehicles wind their way through the Conrad Community Center’s parking lot so drivers and passengers could pass along their well wishes to Betty who was seated near the front doors. On Sunday, June 27, fellow congregants of Capac’s First Baptist Church helped Betty celebrate with cake and ice cream after the evening service.

“It was wonderful,” Betty said of the festivities, fifty-plus birthday cards and dozen balloons she received that week.

Elizabeth Hesketh was born on June 29, 1921 and spent her early years in East Detroit, what’s now Eastpointe. Her earliest memory was playing with her friend Emily at Kern Elementary School.

“I’d help her with reading and she would help me with art,” Betty said.

“We’d jump rope, play jacks and I learned how to roller skate. I loved roller skating.”

Sadly her father was killed in an accident when Betty was nine and then the family found themselves in the throes of the Great Depression.

Her mother had remarried and Betty gained a “wonderful man” as her stepfather but the family struggled to make ends meet with 10 people under their roof, including her grandparents and other extended family who’d lost their jobs.

They found a farm and, from all appearances, its generous owner on Hollow Corners Road in Almont Township. The man offered to trade them even up for their home in East Detroit for his 80 acres, cattle, barns and a house.

Betty and her extended family lived there for four years until they learned seven years of back taxes were owed on the property, making the debt more than what the farm was worth. They moved to Almont and Betty graduated from Almont High School in 1940.

While still in high school, at the age of 15, Betty got her first job as a nighttime switchboard operator. She’d pull a cot up to switchboard and help connect calls—mostly emergencies—in the overnight hours.

She still remembers when, at the age of 16, Social Security came into existence and that first 10 cents was taken out of her paycheck.

“I was so mad when that happened. Now I’m so thankful for Social Security,” Betty said with a chuckle.

Betty and Eugene Burgess were married in July 1941 and the couple went on to have four children—Kenneth, David, Ronald and Kathy.

In the 1960s, Betty started working at the Vlasic pickle plant in Imlay City. She spent three years on the production line and then logged the next 17 years as a dock secretary where she kept track of incoming shipments.

Like all devoted parents, Betty says she takes great pride in the accomplishments of her children.

“I’ve had a happy life and my kids have had good lives too. All of them graduated from college and pursued Master’s degrees,” Betty said.

She’s called Capac home for the last 58 years, spending many of those years in a big house on Main Street where she loved to host family reunions.

Those family gatherings were always lively with poetry readings and singing—something Betty attributes to the many preachers and teachers in her and Eugene’s families.

“Education was always very important in our family. With our relatives, we could have staffed an entire school with certified teachers,” Kathy said.

Betty kept her driver’s license until the age of 90 and now possesses a scooter—which she calls her “Cadillac”—to get around town during the week. Her daughter Kathy takes her grocery shopping on the weekend.

She’s been a regular at the senior center for the last 17 years where she attends chair exercise classes, plays cards and dominoes and enjoys meals.

Other than her vitamins, the centenarian takes just one pill a day for blood pressure.

“I use a cane when I’m out and about but I don’t need it at home. I’ve never broken a bone,” she said.

She’s quick to answer when asked just how she reached 100 years.

“I’ve followed the Lord’s orders—no drinking, no smoking and no partying,” Betty said.

“God has blessed and taken care of me. I have never had to want for anything.”

Betty’s mother lived to be 103 years old but Betty says she doesn’t yearn to surpass that mark.

Conrad Community Center Supervisor Lori Hackelberg, who coordinated the birthday parade, said it was a pleasure to honor Betty and her special day.

“She really loved it,” Lori said of the procession that included fire trucks, police cars, a school bus and lots of friends and acquaintances.

Center staff decorated the front porch and presented Betty with four cupcakes on a tray—each one representing 25 years of life.

“Betty kept saying, ‘I am going to remember this a lot of years,’” Lori recalled.