IMLAY CITY — To say the 2020 school year was a challenge for teachers, school officials and parents alike would most certainly qualify as a colossal understatement.

When the COVID-19 pandemic hit the nation, the state and the area, everything came to an abrupt standstill. As things unfolded it became clear that somehow, in some way, students had to keep learning and teachers had to keep teaching.

Rather than dwell on the challenge, Imlay City Schools faced it head on and shifted gears. Remote learning, online instruction, modified schedules and out-of-the-box thinking made it possible for students to move through the school year.

Those efforts did not go unnoticed. Imlay City Schools (ICS) has been named the 2020 ‘Organization of the Year’ by the Imlay City Chamber of Commerce.

Schools Supt. Dr. Stu Cameron says being recognized with the award is “a true honor.”

“We’re thankful for the special recognition,” he says. “Of course the award is all that much more special—and means even more to the faculty and staff—after the last 15 months of our work during the pandemic.” 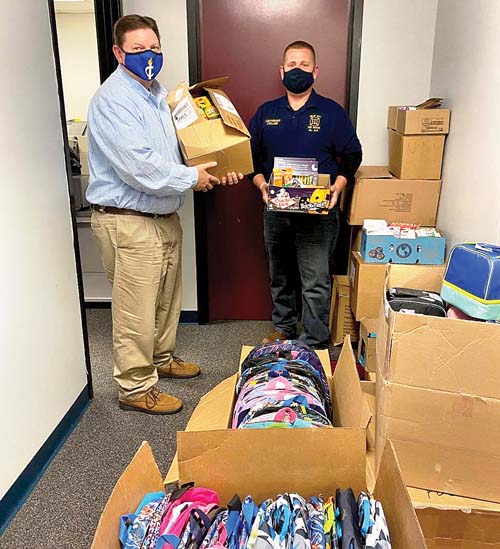 Cameron says the sudden school closure last spring, coupled with the quandary of finding new ways to carry on, served to highlight the strength of schools’ staff, students and parents alike.

“We met as an entire faculty and I said that the hard times we were going to face and how we chose to react would reveal everything about the character of the people here and of the district as a whole,” he says. “I’m proud of the character that was displayed by the people here throughout the entire school year. In the face of what turned out to be an exceptionally difficult year, people worked exceptionally hard, demonstrated a great deal of flexibility, resilience, and persistence.”

That persistence and resilience was evident to resident Jason Hamel, who nominated the school district for the award.

“This year has been a challenging year for many,” Hamel says in his nomination letter. “From quickly organizing a means to teach kids at home, to ensuring students access to meals, to preparing and successfully implementing a strategy to return to face-to-face learning, the schools have gone above and beyond many people’s expectations in accommodating the ever-changing rules and trying to be as transparent as possible while doing so.”

Transparency and the “ever-changing rules” were also in the forefront for the district’s school board, which confronted the unique circumstances head on.

“Our Board of Education was faced with many difficult decisions directly related to COVID or the potential effects of COVID, and bore the weight of those decisions and how they were accepted by the community,” Cameron says. “I know that it became overwhelming for people this year…everyone felt it. It was especially hard to see the students and their parents work through a year in which they had to forego all kinds of activities, milestone events and traditions…(it) weighed on everyone.”

That weight was countered, though, by civility and decorum, Cameron adds, displayed by everyone on staff.

“Our faculty and staff demonstrated a lot of grace throughout the school year,” Cameron says. “They tried to support and encourage one another when things became difficult. They took time to reflect and refocused themselves and one another on our core mission of educating students.”

Parents and students deserve credit, too, Cameron says, noting that the community as a whole stepped up during the difficult times.

“When we talk about ICS as an ‘organization,’ it’s important to remember that we view ICS as the heart of a school community that includes more than just faculty and staff,” he says. “Our organization is made up of students, parents and members of the community who continue to support our work.

“I’m proud of what the district accomplished this year, but it was a true team effort with all of those entities involved. When I speak about people who handled difficulties with grace and understanding, the parents of our students are a prime example.”

Credit also goes to local organizations and individuals who offered assistance and support throughout the year, Cameron adds.

“We’re truly thankful for the support we received from everyone this year. It made our work possible.”

Along with Citizen of the Year Award recipient Cynthia Strobel and Merit Award winner Rob Mette, Imlay City Schools will be formally recognized with the 2020 Organization of the Year award during the city’s Sesquicentennial Celebration in August.