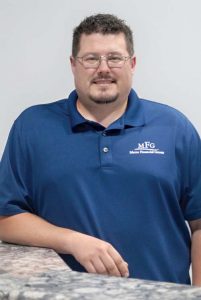 Rob Mette says that being involved in the community fits his personality.

IMLAY CITY — Admittedly, Rob Mette likes to keep his hands on the pulse of the community. The longtime Imlay City Chamber of Commerce board member and newly elected Chamber President says he likes keeping pace with all of the happenings, and doing what he can to make things happen.

What he’s not so keen on is being front and center when it comes to accolades, recognition and awards. This isn’t news to those who interact with Mette personally, professionally or on the Chamber Board. But that didn’t prevent his Chamber colleagues from honoring him with the ‘2020 Merit Award.’

Attorney and former Chamber President Barb Yockey nominated Mette for the award, which recognizes citizens who’ve demonstrated outstanding commitment and service to the community throughout the year.

“I am definitely thankful for the nomination and for the board voting for me,” Mette says. “It’s appreciated, but it’s not necessary. I like being involved. It’s part of who I am.”

Along with diving into the Chamber with both feet when he joined in 2014, Mette joined the Rotary Club and was among the top sponsors for the Rotary Park upgrades. He was elected to the Chamber Board in 2016, and became president this year.

Mette is also heavily involved in 4-H. He’s the project leader in Lapeer County’s only photography club—an area of interest he honed while earning his college degree in journalism with a concentration in advertising and graphic design.

Every year, Mette and his wife Andrea—who is the 4-H Poultry Superintendent for the Eastern Michigan State Fair—help prepare the display area, setting up tents, building risers and the like. He’s also been involved in Scouting, participating in campouts with son Tyler.

He and Andrea also take part in Imlay City High School’s Project Graduation—with daughter Abigael Fox graduating this year. They volunteered to chaperone the overnight party held at the school in June.

Mette was also front and center in the creation of the Michigan Busker Fest, and has been heavily involved in just about every aspect of the Chamber.

“Rob gives unselfishly of his time to the Chamber,” Yockey says. “He is constantly providing advice and support in the form of assistance with computer and phone issues, day-to-day Chamber issues that pop up, is on the Sesquicentennial Committee and just generally does whatever needs to be done.”

An area resident since 2007, Mette opened Mette Financial Group a half-dozen years ago. He now operates in the refurbished, historic former police station on Third Street downtown. He’s been a qualifying member of the ‘Million Dollar Roundtable’ for more than half his career.

Mette says he likes being involved in Imlay City—noting that involvement fits his personality.

“I just like doing things. I’ve got kind of a Type A personality so I like to be in charge,” he says. “But at the same time I don’t look for recognition…I’m embarrassed by it.
What’s most rewarding to me is seeing the outcome, the final product, seeing people walk through the festival or the fair and having a sense of accomplishment at the end.”

Mette says his vision for the city is to have a more vibrant downtown, and to engage business owners in the Chamber and beyond.

“All organizations in the city—the Chamber, the DDA, Rotary, and others, are trying to do their best to put on events for the community,” he says. “It would be nice to see the entire business community be part of the hard work that these organizations are doing to provide for them.”

Mette will be presented with the 2020 Merit Award during the Sesquicentennial Celebration in August.

His was the winning design in the communitywide Sesquicentennial Logo Contest held earlier this year.