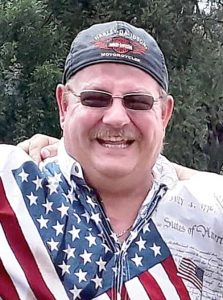 Dennis James Wilcox, 51, of Imlay City and formerly of Marlette, passed away June 24, 2021 tragically and unexpectedly on his Harley Davidson. He was born August 24, 1969 in Deckerville, the son of Donald and Melva Wilcox. He worked for many years as a truck driver and recently for Cass Valley Co-Op in Marlette. He was formerly a volunteer fireman for Marlette and Argyle Fire Departments. Dennis married “his person” Kris Jahn on April 3, 2021 in Rochester. He was an avid outdoorsman and enjoyed deer hunting and fishing on the Black River. He enjoyed camping with his family at Onaway and Forester Park. Dennis was an avid card player, playing euchre, rummy and spoons. Most of all, he enjoyed spending time with his family.

He was preceded in death by his parents; and siblings Bill and Clarence Wilcox and Loretta Matthews.

In lieu of flowers, memorial donations can be made in Dennis’s name to the Marlette Fire Department.