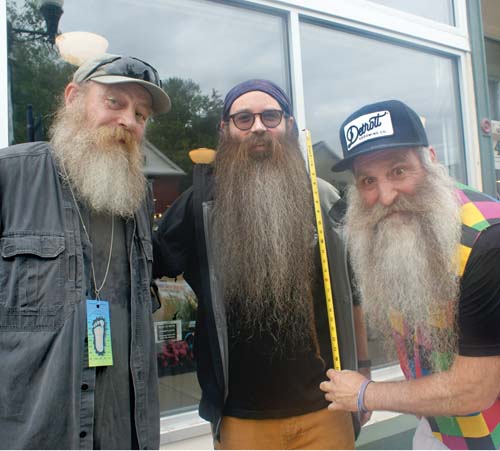 Sasquatch UnCut coordinator Mark Byrnes (right) measures the beard of one of the more than 100 competitors in the inaugural beard and mustache growing competition.

IMLAY CITY — Neither rain, nor heat and humidity, nor flooded freeways could keep the bearded masses from gathering in downtown Imlay City over the weekend of June 25-26.

The occasion was the first-ever “Sasquatch UnCut” Beard & Mustache Encounter,” which attracted hundreds of hairy humans to compete for trophies, prizes and bragging rights for the year 2021.

Mark Byrnes, who has competed and won numerous beard growing competitions in the past, masterminded the inaugural event.

Byrnes estimated that more than 400 people—including ladies and children—showed up to show off their beards, mustaches and hairy selves, including more than 100 who competed in the various growth and style categories.

“It really turned out to be wonderful,” said Byrnes. “To see all the beards, mustaches and smiling faces come to Imlay City was great. It was a lot of fun for everyone.”

Byrnes acknowledged the efforts of Jim and Bobbie Lewis, who helped to coordinate and promote the event on social media and the 2021 Sasquatch UnCut website.

During the hours leading up to the competition, the Lewis’s could be found at a table at Third & Main Event Center registering the dozens of competitors.

For the competition itself, everyone relocated to the old fire hall, where a panel of judges had the difficult task of selecting winners.

The first-place winner in the “Sasquatch” category (two-foot-long plus natural full beard) was Alaska resident, Adam Bruck, whose trophy was sponsored by Jalisco Mexican Deli of Imlay City.

Taking “Beast of Show” honors was Joseph Farrell of Pittsburgh, PA, whose score of 49 out of a possible 50 points, was the highest registered at the event. Farrell’s award was sponsored by the Imlay City Rotary Club.

Byrnes pointed out there was a “tie” between the second and third-place winners in the “Women’s Creative” category, which required resolution.

Per tradition, he said the winner had to be selected through the time-honored process of “rock, paper, scissors.”

Near the event’s completion, a large crowd assembled inside the old fire hall and acknowledged Byrnes with a spontaneous standing ovation.

“I was totally floored,” said Byrnes, who was accompanied by his daughter, Rebecca Byrnes, who flew in from California especially for the event.

In keeping with the spirit of Sasquatch UnCut, Rebecca donned a beard of her own.

“I was so happy Rebecca could be here,” Brynes said. “She’s a great source of support and an inspiration to me.”

Byrnes said some of those in attendance opined to him that the Imlay City event was among the best-ever.

Given the success of of Sasquatch UnCut, Byrnes is already making plans for a repeat performance in 2022.

“Without a doubt, we’ll be doing it again,” he said. “We’ve set the bar pretty high with this one, but we’re going to try and do it bigger and better next year.

The event also provided opportunities for attendees to donate to some good causes.

The beneficiaries of those donations included Six Feet Over, an organization that works to prevent suicide and provide assistance for survivors; and the WOW Chapter of the American Rosie the Riveter Association, of which local resident Bette Kenward serves as president.