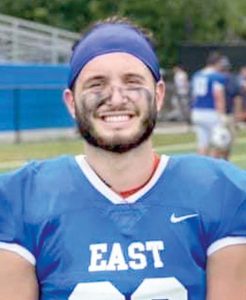 Lawrence Tech, in Southfield, is where the game was contested.

In Saturday’s matchup, the West squad grabbed a 6-0 edge after one quarter was history.

The West then followed it up with a 28-7 second quarter advantage, increasing their cushion to 34-7 at the half.

When the action resumed, the West squad continued to pull away. Aided by a 7-0 third quarter edge, they were able to widen the gap to 41-7.

The West and East then collected seven points each during quarter number four, leaving the former with a 48-14 win to celebrate when the final second ticked off the clock.

Lulgjuraj was credited with two tackles, including one sack, while playing middle linebacker, outside linebacker and defensive end.

On the other side of the ball, Lulgjuraj lined up at a running back position.

It was there he finished with one rush for five yards.