Stine, Haldeman are on title squad 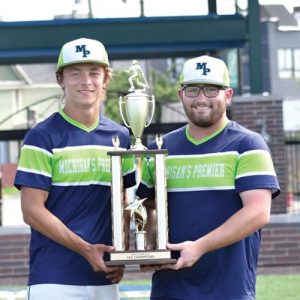 ALMONT — Michigan Premier’s 18U baseball team, which includes Almont’s Reis Stine and Brenden Haldeman, registered a first-place finish at the No Doubt Classic this past weekend.

Games were contested on the site of the old Tiger Stadium in Detroit.

The squad began their title-producing run Friday with a 9-0 win against Macomb Patriots.

They then handed Metro Detroit Baseball Club an 8-1 setback and made Elite Select absorb a 3-1 loss behind the no-hit pitching of Stine on Saturday.

Those outcomes earned them the number one seed.

Michigan Premier followed it up Sunday with a 10-0 semifinal win against Detroit Trailblazers.

They then met Metro Detroit Baseball Club for tournament honors next.

When the final scores were tallied, Michigan Premier prevailed via an 8-0 count.

Stine had a good weekend at the plate, going eight for 13 for Michigan Premier. Haldeman added a five for nine performance to their cause.