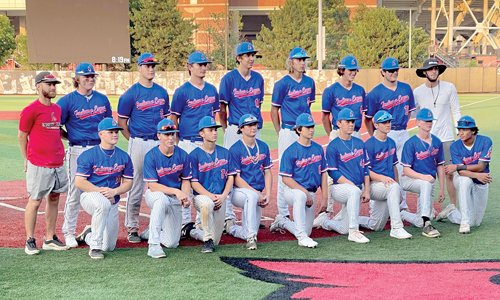 The Indiana Expos 17U National baseball team, which includes Almont’s Kylar Fisher (back row second from left) took second at a tournament in Kentucky this past weekend.

ALMONT — The Indiana Expos 17U National baseball team, which lists Almont’s Kylar Fisher on its roster, took second place out of 34 entries in an 18U University of Louisville Midwest Tournament of Champions this past week.

The squad started things off Thursday with a 9-4 Indiana Primetime 17U.

Later that day, the team improved to 2-0 with a 7-4 triumph against Commonwealth 17U Grays Black.

Those outcomes placed the team in the Gold Bracket.

It was there the Indiana Expos made Indiana Primetime 17U absorb an 11-1 loss and hand Indy Longnecks a 9-0 setback.

They then squared off versus Midland Redhawks for tournament honors next.

Sunday’s contest drew to a close with the Midland Redhawks pulling out a 15-13 victory. That battle lasted eight innings.

Fisher finished the tournament with four singles and three doubles in 20 at bats, leaving himself with a .350 batting average.

He also contributed 10 RBI, three walks and two runs scored to his team’s cause.