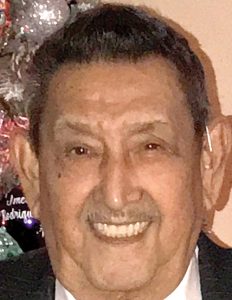 Juan “John” Rodriguez, age 85, of Almont, MI died Thursday, June 10, 2021 at The Pines of Lapeer. Juan Inosente Rodriguez was born December 28, 1935 in Rio Medina, TX. He was the son of the late Augustine and the late Apolonia (Najar) Rodriguez. He married Imelda Aguinaga on January 7, 1961 in Imlay City, MI. John lived most of his life in the Imlay City, MI area. He was preceded in death by his wife, Imelda, on November 21, 2014. John proudly served in the United States Army. He was employed as a general laborer by L&L Products in Romeo, MI for 26 years. John also worked as a farmer in the Imlay City, MI area.

Please be sure to sign the online register at muirbrothers.com to share condolences and memories with the Rodriguez family.