Capac bows out with loss to Richmond 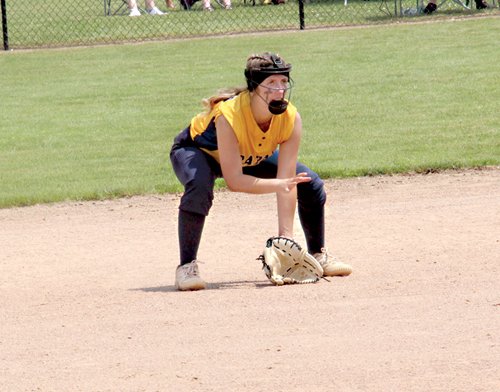 Capac’s Skielar Tesnow gets in her defensive stance during last Saturday’s Division 3 regional game versus Richmond.

CAPAC — Capac bowed out with a 13-0 loss to second-ranked Richmond in a Division 3 regional semifinal softball matchup last Saturday afternoon.

Millington High School is where the action unfolded.

With the outcome, Capac sees a 14-8 campaign draw to a close.

In Saturday’s matchup, Richmond (the eventual regional champions) jumped out to a 4-0 advantage after one inning was over with.

The next three innings would see Richmond outscore Capac by matching 3-0 counts, pushing their cushion to 13-0 after four complete innings.

Neither side reached the scoreboard during the fifth and final inning as Richmond closed out the win.