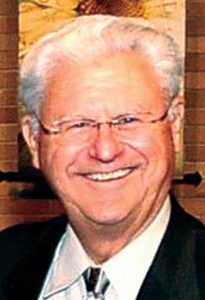 Arthur “Art” Korson, age 85, of Dryden, MI went to be with the Lord on Saturday, June 12, 2021. Arthur Willard Korson was born on February 10, 1936 in Omena, MI. Son of Arthur and Mollie (Houdek) Korson. Art grew up in Northport, MI and graduated from Lake Leelanau St. Mary’s School, Class of 1954. Art continued his education at Ferris State College where he earned his Bachelor’s of Education degree and then went on to earn a Master’s degree in Agriculture from Michigan State University. Art proudly served in the United States Army from 1959-1960. He married Joyce Schafer on August 15, 1964 in Armada, MI. Art and Joyce moved to Dryden, MI in 1968. He taught typing, business and drivers training as well as coached basketball at Mackinac City, New Lothrop, Royal Oak Dondero, Rochester West Middle School and Rochester Adams. After teaching for 32 years, he retired in 1994.

Art had a deep faith and was an active member of St. Cornelius Catholic Church where he served in many capacities including the Parish Council President and Building Committee Chairman. He was instrumental in building St. Cornelius’s first addition. He was a man who could fix just about anything and even built his own house. He loved to play euchre and cribbage; and was highly competitive! But most of all, he was probably best known for his love of the outdoors, especially hunting and fishing. He hunted all over the world, including Africa, New Zealand, Mexico, England, Argentina and Canada; and as a Safari Club International member he held several world records for his trophies. He had a quick wit and enjoyed telling the stories of his adventures, making you feel like you were there with him. Art’s family had the comforting assurance that he would always be there for them no matter what. He leaves his family with a legacy of loyalty, honesty and love. He was a hardworking, faithful provider who raised his sons to be the same for their own families.

Art was preceded in death by his parents; and siblings, Loretta, James, Barbara, Raymond, Willard, Joseph and Blaise.

Please be sure to sign the online register at muirbrothers.com to share condolences and memories with the Korson family.